Becky, an introduction to being a hotwife (with photos)

Reading through the forums it appears a lot of the posts on here are from those considering introducing their partner to the ‘hotwife’ lifestyle and looking for some kind of advice or support or even guidance. So, I thought I would offer the story of my own introduction and first time experience in the hope that this might help anyone reading it. I’ve placed it in the lifestyle section as I hope people will feel free to add their comments or thoughts to the thread and maybe it will help others.
Reactions: hungry4pussy2eat, Mrstevela, cuckjohn71 and 10 others

It was my husband who brought up the idea of me being a 'hotwife' just before we got married (great timing eh!), saying he couldn’t marry me unless he had been totally honest with me about his deepest fantasies. To say I was stunned would be an understatement. My first reaction was ‘no way, he can’t love me’ followed by one of ‘this is just an excuse so he can fuck other women’. However, rather than being disheartened by my response he patiently explained how he felt, how the idea of seeing the woman he loved getting pleasure really turned him on and that he didn’t want anyone else and as I listened my initial fears faded. Gradually, I relaxed and instead of being upset at the idea I found myself becoming just a little intrigued by thought of being shared with other men.
Last edited: Jan 6, 2017
Reactions: Mrstevela, mrobertswot, whiskeytrot and 21 others

I am not going as far as the first time experience but that was a truly memorable and highly emotional event that I will never forget. Your initial post regarded many on here trying to introduce their partner into the hotwifing. We had no idea that was what we were going into when we had that first talk. We decided on an online profile to find another couple to swing with. Not as easy as we first thought. A 4 way chemistry is a mathematical improbability at least in remote areas of the US. We decided the polyamory life would be more suited than trying to find a multitude of suitable partners. As it worked out a single hetro male fit the bill leaving me as a part of a V. So yes we had many many talks and communication saved these dreams from being destroyed by jealousies or misconceptions. We talked our way through it and it is very rewarding to have someone special to share your relationship with.
Reactions: whiskeytrot, Freebird1959, Picklerick and 2 others

Thanks ntcuck....someone is alive and communicating on here. You're so right about communicating, from that comes the trust and honesty that is so important if your relationship is going to survive and become stronger. Having that sort of relationship makes the experiences so much more rewarding, as you say, for both of you.
Reactions: Picklerick, Johnfunone, Adultjdstudent and 9 others

Before meeting my husband to be I had only been with my ex and my sexual boundaries were rather unadventurous to say the least. However, once we were married we continued to talk about me becoming a ‘hotwife’, although my husband never once tried to pressure or coerce me into the lifestyle, and, over time, I found myself wondering what it might be like to have experiences that I would have previously considered forbidden. Eventually, I agreed to allow some of his fantasies into our bedroom, just between us, things like him photographing me and pretending he was a stranger or me talking about fictitious dates I had been on. It was immediately obvious how arousing my husband found the whole idea and I have to say I did to. As we continued to talk and act out his suggestions my interest slowly developed until finally I knew I had to try it for real, regardless of how scared I felt.
Last edited: Jan 6, 2017
Reactions: Romey, BostonCouple, NicaNica and 15 others
N

I like your story. I've told my wife about my desires and at times seems open to it but than at times seems disgusted at me for mentioning.you give me hope.
Reactions: Kinky2, nutinbutfun, 1sweetcouple and 1 other person

Even though our story is different there are some parallels. We are both first time married for 35 years. She had many sexual experiences with multiple partners looking for Mr. Right. She had even been shared by a boyfriend and that experience carried a very negative connotation. I myself was more of the good little Catholic Boy saving myself for marriage. I never saved myself. The male hormones won. Yet I was quite inexperienced but thankfully the internet gave us some good research resources for our ambitions. We hid our desires carefully behind walls. What a terrible mistake. Communication tore down those walls and our adventure started. The one thing we comfort each other with is maybe we needed to wait until this point in our life so we would be mentally strong and ready for this.
The thing we do differently is be open to what is good for the goose is good for the gander. She has watched me with a female partner and has not participated yet when I have finished she loves the physical reconnect to clean me up and have her time with me. Sort of a reverse cuck if you may.

Thanks NJCuck, that was the idea behind telling it. I can't say I treated my husband's first suggestion with unbridled enthusiasm but, with patience, he slowly changed my ideas and let me become the sexually independent woman was hiding inside me.
Reactions: Bleepbleep38, 1sweetcouple, ptjn85 and 1 other person
N

xxxcouplexxx said:
Thanks NJCuck, that was the idea behind telling it. I can't say I treated my husband's first suggestion with unbridled enthusiasm but, with patience, he slowly changed my ideas and let me become the sexually independent woman was hiding inside me.
Click to expand...

Does anything stand out that he said or did that helped with you being open to it.?
Reactions: nutinbutfun

NJCuck said:
Does anything stand out that he said or did that helped with you being open to it.?
Click to expand...

His honesty and openness, without that you're doomed before you even start.
Reactions: Bobthebuilder, lovemywifeslutty and jon carlton

Having made the decision my next concern was how we would find a suitable partner for me, one I was comfortable with and who wouldn’t object to my husband watching or taking photos. I need not have worried, my husband had thought that one through already and suggested a young guy he worked with who I had met a couple of time's before at his work do’s. Matthew had seemed nice enough when I met him, a little young maybe but certainly pleasant enough. His choice bothered me slightly as I knew my husband would have to see Matthew on a daily basis at work afterwards, knowing that he had had me, and this might make his life awkward but he said that this would only add to his enjoyment so, nervously, I agreed. As the planned evening got closer I became more and more nervous despite my husband’s efforts to calm me down. By the time the agreed night came round I was really apprehensive and I spent ages deliberating what to wear but in the end I settled for something fairly normal, not wanting to appear a complete slut.
Reactions: Mrstevela, private man 69, Jewbaka and 10 others 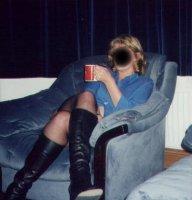 When he finally arrived, I was so nervous that I could hardly speak but Matthew was just as pleasant as I remembered and behaved perfectly normally and as we chatted I slowly began to relax. Nothing was rushed and to begin with we just talked generally for a while, as if nothing untoward was going to happen, until my husband suggested I go and sit with Matthew on the sofa. From that moment things began to move a little quicker as he began kissing me and I completely forgot about my husband sitting there taking photos of us. Matthew spent ages unhurriedly kissing and teasing me, his tongue and fingers gently arousing me until, finally, he had stripped me down to my stockings and spread-eagled on a chair with his mouth clamped on my pussy. All my concerns about being shared were now forgotten as I moaned with pleasure, my thighs clamping tight about his head and my back arching as he made me cum noisily for the first time that night.
Reactions: Mentor de Lyon, Mustanglx50, Freebird1959 and 16 others 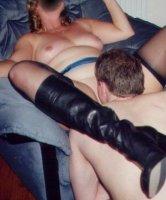 thank you 200+ views up, we had hoped for a few more comments and discussions but maybe you're all shy
Reactions: Romey, athleticman92, superman4 and 1 other person


Breathing heavily, my body trembling as I recovered from my first orgasm of the night, I began to feel rather uneasy at getting so carried away and ignoring my husband, sitting there watching with his camera in hand. As I looked across to him he gave me a knowing smile and a silent “enjoy yourself” to let me know he was ok with what was happening and I knew then I could let myself go. So, when Matthew lay back waiting for me to return the compliment I didn’t hesitate, all reservations gone I leant over him and took his cock first in my hand and then my mouth. This time though I gave my husband some attention, frequently looking up at him as I worked my lips up and down on another man’s prick. In fact, seeing the intense pleasure on my husband’s face as he watched me swallow Matthew’s cock gave me a huge thrill and my self-confidence immediately began to grow. I continued sucking and licking on the shaft for several minutes with the click of the camera shutter in the background until Matthew’s groans alerted me to the fact he was getting close and knew he was ready to fuck me.
Last edited: Jun 21, 2019
Reactions: Mustanglx50, pistolpete, werekinky2 and 10 others

320 views...once again thank you all for taking the time to look through this post, time for another?
Reactions: werekinky2, Riversideman and jon carlton

I wanted him in me so badly now I could barely wait, kneeling and looking up at my husband as he watched intently while his workmate rolled a condom onto his erection. As soon as I could I straddled him, reaching down and guiding his cock between my labia, sensing them peel apart, then slowly lowering myself and feeling his hard erection slide all the way into me until I was completely impaled on it. I had done it, taken another man in me, it felt exhilarating and liberating at the same moment and I was sharing it with my husband. Unhurriedly I began to ride Matthew’s cock easing myself up and down, loving how it felt in me, my hands bracing me as I worked my hips looking up into my husband’s eyes as he watched me fuck another man.
Reactions: Mentor de Lyon, Bleepbleep38, wife has permission and 18 others 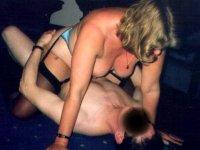 How to Convince Your Wife / Partner Aug 13, 2022
majorem
M
P
A lengthy introduction and request for advice

How to Convince Your Wife / Partner Aug 4, 2022
hotwifelexy

A
How to convince your wife/ partner

How to Convince Your Wife / Partner Nov 10, 2022
amateur_19
A
B
Returning to the lifestyle